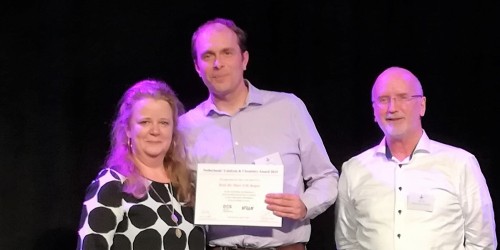 On the 5th of March 2019, at the 20th anniversary meeting of the Netherlands' Catalysis and Chemistry Conference (NCCC), the 3rd NCC Award was presented to Prof. Marc Koper, from Leiden University.

The award is sponsored jointly by the Netherlands Organization of Catalysis Industries (VIRAN) and the Dutch Catalysis Society (DCS) and the certificate is accompanied by 10 000 Euros. The NCCA recognizes and encourages significant achievements of individuals in fundamental and practice of catalysis. Candidates are active researchers from academia, research institutes or industry located in The Netherlands or Belgium. The candidate may have carried out part of the research in other countries or is currently active abroad. The selection is based on accomplishments and contributions made within the last 10 years. It is not a lifetime achievement award per se. Previous winners are Bert Weckhuysen (2009) and Ben Feringa (2015).

The jury recognized that this candidate has been exceptionally active and successful in the last ten years, visible from his publications and impact factor, as well as his presence and recognition in the national and international communities. He is very independent and has a clear and unique research profile in a field of catalysis, which will only become more important in the coming years. His impact in the field of catalysis as well as on society at large is therefore only expected to increase.

Prof. Marc Koper has made significant contributions in the area of theory of electrochemical transfer and electrocatalysis and has been pioneer in the applications of first principle theory calculations to surface electrochemistry. A characteristic of Marc's work is the combination of electrochemical measurements, typically on well defined electrode surfaces, with theory and in situ techniques. Catalytic systems have been developed and pioneered by Marc to advance the understanding and optimization of small molecule activation, in an effort to address contemporary energy challenges. He uses all electrochemical methods and characterization techniques at hand, and also develops these for application in electrochemistry, e.g. differential electrochemical mass spectroscopy, in situ atomic force microscopy and ultra-sensitive infrared spectroscopy, leading to insights in reaction mechanisms and reactivity trends.

Prof. Koper is well recognized in the Netherlands as is clear from his ARC CBBC membership, and multiple funding grants including an NWO VICI and multiple NWO TOP grants. He was recently elected as member of the Royal Netherlands Academy of Arts and Sciences. Internationally he is highly respected and recognized, proven by for example the 2013 Carl Wagner Memorial Award (Electrochemistry Society USA), 2016 Brian Conway Award (International Society of Electrochemistry) and the 2017 Faraday award (Royal Society of Chemistry). In 2018 he was elected as president of the International Society for Electrochemistry.

A few remarks from the international recommendation letters:

“Marc is passionate about teaching, mentoring and sharing his knowledge, which is a constant inspiration to students and colleagues around him.

“Marc is a brilliant and careful scientist with sharp intellect, “leaving no stone untouched”.”

“The ultimate candidate for the prize”.